It had been a decade since a Hancock dominated girls high school track in Colorado. Then Kathleen Hancock settled into the starting blocks for the state Class 3A 400-meter dash final in May 1986.

Hancock was about to re-establish her family’s reign in the race. Her older sister Freda had been Colorado's prep sprint queen in the mid-1970s, winning state titles in the 100-, 220- and 440-yard dashes.

The younger Hancock blazed to victory at Jefferson County Stadium in Lakewood. A sophomore, Hancock led from start to finish in 56.86 seconds.

Fast forward to May 1987. Hancock was the defending champion. The state meet was held at Dutch Clark Stadium and the Centennial High School speedster had a home crowd to cheer her on.

The second title was harder to achieve. Hancock fought off a challenge from Montbello's Deana Wells to repeat her title in 55.94. Wells crossed 9/10 of a second behind. 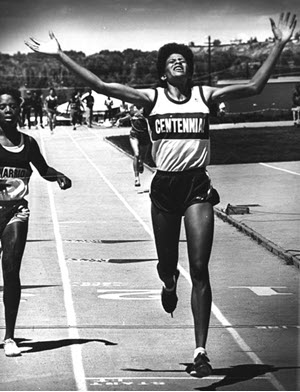 Chieftain Photo/File: Kathleen Hancock wins the Class 3A state title in the 400 meters in 1987 at Dutch Clark Stadium. She also won the event in 1986.

Hancock's back-to-back dashes to state crowns have been picked as a singular Great Moment in Pueblo Sports History and will be recognized by the Greater Pueblo Sports Association at its 2015 Hall of Fame induction banquet in November.

"I'm honored, but very shocked to be truthful," Hancock said of the GPSA choice. "When I got the call, I thought 'really?' Winning a third time would have been more prestigious … something that never had been done."

Hancock came close. She fought a quadricep injury for much of the 1988 season and finished second at the state meet to Rhonda Jackson, another Montbello rival who had been runner-up to Hancock two years earlier.

Now a firefighter/paramedic in Aurora, the 44-year-old Hancock said she tends to reflect on her high school days — the twin wins and the near miss for a three-peat.

"I don't know if it was a disappointment," she said. "The chance to claim the title a third year was a time that meant most. It would have been something my sister hadn't done.

"I went on to college (Iowa State) and could reflect back on that time," she added. "It gave me that extra oomph to push harder."

Hancock said her second gold medal performance was the most memorable.

"We hosted it (the state meet) at Dutch Clark and I actually got to compete in front of my entire family and friends. The state tennis tournament also was being held (in Pueblo) and people from the tennis matches came to watch. It meant more because I won in my hometown," she said.

Hancock noted that her niece Ronaleen (Freda’s daughter) was the 2000 state champion in the girls 400 for Central High School.

So how do the three champs compare?

"We were pretty equal in height and all naturally had the build for the 400," Hancock said of the trio’s similarity in physical stature. "Freda ran in yards. She just had overall strong physical determination. She blocked the world out when competing. She set the tone. She ran in the summer traveling.

"I was pretty little and couldn't believe the people she was running against … (Evelyn) Ashford, (Chandra) Cheeseborough. I interacted with people more than Freda, but when it was time to compete I shut it off.

"Ronaleen could have been more competitive. She was more laid back but if someone made a comment, she would run. You had to get in her head to test her."

These days the Hancock sisters have turned their attention to longer distance road races.

"You never get rid of that competitor (spirit)," Kathleen Hancock said. "I get into a race and feel that push, always competing with myself."