Before High School:
"Kosho" was a pitcher in the Old Timers Baseball League for 14 years (1952-66)...Played football (quarterback) and basketball (guard) at Corwin Junior High from 1958-62.

High School:
Attended Pueblo South H.S., and participated in baseball and football for the Colts...Dan graduated in 1963. 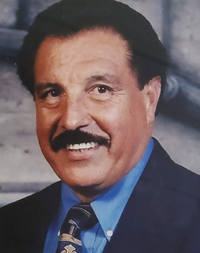 College:
● Went to Southern Colorado State College (SCSC) where he played baseball (infield) for the Indians before graduating 1966.

Quote:
"Dan ‘Kosho’ Trujillo was, without a doubt, the best infielder that I have ever coached."
-- Don Stutters, coach at SCSC

Personal:
Lives in Westminster, CO with his wife, Kathy DeHerrera.