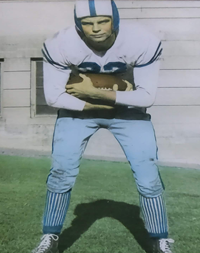 High School:
Attended Pueblo Central H.S., graduating in 1945...Four year (1941-44) member of the Wildcats football team playing fullback and end...Also played four years (1941-45) of basketball for Pueblo Central as a guard and at #2 Singles in tennis.

High School Achievements:
● Playing as a end, Drummond earned All-City, All-South Central League; Honorable Mention All-State (1941).
● As a fullback, named captain and earned All-City; All-South Central League; All-State; named "Most Outstanding Player" for the 1944 season as the Wldcats captured the state football championship.
● Listed in Pueblo H.S. Football records as the only player at the time to break the Century mark in scoring (in one season) other than Dutch Clark.

College:
Went to Pueblo Junior College (PJC) for a year (1946-47) and played basketball (guard) and baseball (pitcher/catcher)...Helped the team to the conference championship and went on to play in the Junior College National Tournament in 1946... Transferred to Colorado College (CC), graduated in 1949... Played two years (1946-48) at end and fullback on the Tigers football team... Dale made 2nd team All-Conference as an end in 1946...Named Co-Captain 1947.