The University of Southern Colorado baseball team cleared hurdles along a golden path, set records and became the first Colorado team to qualify for the NCAA Division II College Baseball World Series. Not only that, but it won a game in the 10-team, double-elimination affair in Montgomery, Ala., setting another standard. The ThunderWolves finished 44-23.For their accomplishments, the team’s ride to Montgomery has been named as a great moment in Pueblo sports by the Greater Pueblo Sports Association and will be honored during the organization’s annual banquet in November. 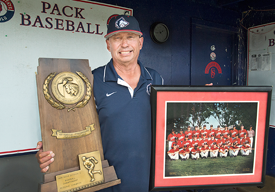 Head coach Stan Sanchez, hired to resurrect the program in 1994 after it was dropped in 1985, helped put USC on the Division II map. He just concluded his 23rd season this past spring.“No. 1, they were just a bunch of competitors and found ways to win,” Sanchez recalled. “It was a very talented group and for us to get there we had to win the league tournament and it took us 27 innings in one day to do that.”It only its third season back, the ThunderWolves won their second Rocky Mountain Athletic Conference regular-season title. Then, after dropping their second game in the RMAC tournament, they battled back. Having to win three games in one day because of weather backups, USC pulled off the improbable, winning three consecutive games and capturing the tournament title. Sanchez had T-shirts printed that said: “10 Hours of Intensity, 27 Hours of Excellence.”Riding that wave of momentum, Southern headed to its second Western Regional in three seasons in California where No. 2-ranked California-Riverside and 16th-ranked California State-Chico awaited.Playing on Riverside’s home field, the T-Wolves stunned the Californians. They beat Chico in their regional opener. Chico then stunned Riverside and USC ended Riverside’s season in the three-team, double-elimination affair with a 6-3 victory.That set the stage for a battle with Chico as USC was unbeaten. Chico forced a second championship game with an 11-7 victory before USC pulled off a 7-6 win in the regional championship, dog piling on a California infield.That propelled USC into the Division II World Series, a first for a Colorado school and only the second time in 29 years a non-California team had represent the West Region in the Final Eight.

“That was amazing,” Sanchez said. “California was the toughest region at the time.”At the World Series, the T-Wolves dropped a 7-1 decision to Kennesaw State (Ga.) in its opener before defeating Shippensburg (Pa.) 10-2. Then, USC dropped its second game in the tournament — a 5-4 loss to Adelphi (N.Y.) — and was eliminated.Sanchez still can rattle off every player on that team.“You don’t forget people like that that got us to a world series,” he said. “That team was full of tough competitors, hard-nosed kids.

It was an amazing feat for a third-year program.”While it took a coach from California and nearly a dozen players from the Golden State to get a Colorado team to the national tournament, no one can deny it was quite a ride.After USC was eliminated, Sanchez said this: “It’s a great club. We showed great character all year. They did a lot of special things. It’s been a real good group. I’ve enjoyed it. They are a special group of players. It won’t come around for a while.”That day still hasn’t come as the Pack has yet to return to the Division II World Series.But that 1996 club will always remember how a dream became a reality and created lifelong memories.“I thought when we left Montgomery we’d be back,” Sanchez said. “It just goes to show how hard it is to get there and that group did it. Holy smokes, that was a special group for getting it done.”