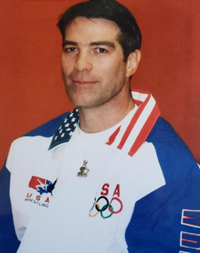 Achievements:
High School:
Played on the Eagles football team (running back) and was a member of the wrestling squad for three years. Ran cross country.

College:
Attended the University of Northern Colorado (UNC) in Greeley, CO...Graduated in 1980 with a B.A. in Physical Education.

Related Activities:
● Keynote Speaker for several wrestling organizations, banquets, hall of fames, coaches' clinics (2005-21).
● Organizes All-State team dual and selection in the state of Idaho.
● Wrestling Publication, Published "The Training Log, a Road to Success" (2002).
● While training athletes at the (OTC) Olympic Training Facility in Colorado Springs he would frequently bring Olympic caliber athletes to Pueblo and host camps and clinics for Pueblo's youth at no charge.
● A few of the athletes and coaches he brought to Pueblo included Olympic Head Coach Joe Seay, Olympic Champion Kenny Monday and bronze medalist Les Gutches to name a few.

Quotes:
Cliff brought out the best in his athletes over his 36 plus year coaching career. He was a master of motivation and a passion for the sport of wrestling were the keys to his success".
-- Pat Laughlin