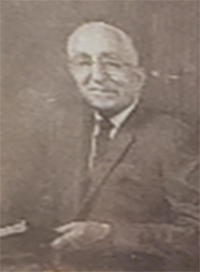 Achievements:
High School:
Played and lettered in football (lineman) and basketball for the Bulldogs.

College:
Went to Denver University year, graduated in 1928 with a dental degree.

Achievements:
College:
Played and lettered in football (lineman) and basketball for the Pioneers.

Contributions:
● Served 20 years as a football and basketball official.
● Became the first commissioner of the Empire Junior College Conference (1949-1957).
● Conducted the First A.A.U. Basketball Tournament ever held in Pueblo.
● Past President of the Southern Colorado Division of the Rocky Mountain Officials Association.
● Vice President and a Member of the Board of Directors of the Pueblo Kennel Association.