They are called instant classics.

They are those games, seasons or events so rich in character, so meaningful, so exciting to watch, that they are promptly promoted to legendary status.
The Greater Pueblo Sports Association felt so moved by Colorado State University-Pueblo's run to a national football championship that it named it one of three great moments in Pueblo sports history even though it happened just seven months ago.

The ThunderWolves can, arguably, claim Pueblo's single greatest sports achievement by a team. With all due respect to the 1961 Pueblo Junior College national champion basketball team, and all those state high school championships won through the years, the Pack's run to the 2014 Division II national football title earned this town positive recognition unparalled in sport.

When the clock at Sporting Park in Kansas City ticked down to 0:00, there in bright lights flashed the sweetest sight in Pueblo football history: CSU-Pueblo 13, Minnesota State-Mankato 0.
That's right, the ThunderWolves, with the best defense in the nation, posted a shutout to win a national championship. It was the school's first national championship in football and its first as a four-year institution.

The ThunderWolves' legend didn't grow over time as much as it evolved. It took seven seasons — just seven — for them to go from borrowed helmets and pads to raising a national championship trophy. 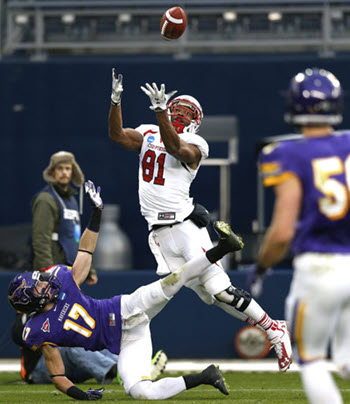 "Wow," CSU-Pueblo head football coach John Wristen said. "It's been a heck of a ride. Bringing back football was good for the school and good for Pueblo."

Win totals increased on an annual basis. So, too, did heartache after each loss in the playoffs.

Then came 2014, when a great rushing game, a capable quarterback and the nastiest defense in the land went on a historic run through the playoffs.

First up, Angelo State. The T-Wolves wallopped the Rams 52-14.

Next came a solid, well-coached team in Ohio Dominican. The Pack bolted out to a big lead and then hung on for a 31-28 win.

West Georgia then showed up at the Neta & Eddie DeRose ThunderBowl. The Pack held the visitors to 26 points under their season average in a gut-wrenching 10-7 win. The ThunderWolves used a reverse pass to score the game-winning touchdown.

That win sent CSU-Pueblo, and many of its faithful, to Kansas City, where the ThunderWolves met heavily favored Minnesota State. How could the Pack hold down the Mavericks' offense? How would CSU-Pueblo be able to score against such a vaunted and experienced defense? Will the ThunderWolves even be able to make a game out of it on national television against the No. 1-ranked team in the land?

The game was one-sided – in the Pack's favor.

CSU-Pueblo held MSU to just 265 yards in offense – nearly 200 under their per game average. They shut out the Mavs, who averaged 43 points a game. They had four players with eight tackles apiece. They recorded four sacks. They blocked a field goal.

In short, the defense did its job better than it had all season in the biggest game of the season.

Offensively, the ThunderWolves found just enough. Two field goals and one highlight-reel touchdown pass and catch than traveled 18 yards on the field and is still soaring to this day in Belmont.

The win shined a bright light on the program and the school. Several coaches were offered jobs at other institutions. Several players particiapted in NFL minicamps.
Wristen months later still had trouble putting into words describing the national championship game.